The K6 telephone box was purchased from British Telecom for one pound by the parish to save it from being taken away as it is seen as a feature of the village. It has been refurbished and established as a book, magazine and CD exchange. The concept is that parishioners can exchange books and CDs, of similar quality of course. 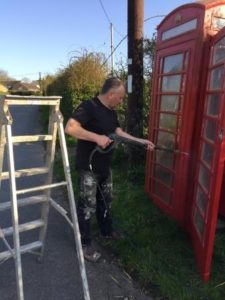 Books, magazines and CDs can be borrowed without an exchange but must be returned. Also in the ‘phone box is a whiteboard. This has been donated for members of the parish to record observations of local wildlife and plants of interest. For example, the first siting of rarer birds, butterflies, wild flowers etc. It is hoped that a record will gradually be built up of some of the local flora and fauna.  Do check out our new “Nature” page.

There are plans in 2019 to improve the operation of the ‘phone box door, lay slabs to solve the muddy entrance and to site a local map, probably to the side behind the bookshelves.

If you have a donation to be made to the telephone box stock, please first contact Georgina Taylor on 01963 210857.

The iconic red telephone kiosk was the result of a competition in 1924 to design a telephone box suitable for London Metropolitan Boroughs. A design by Giles Gilbert Scott, a British Architect, was chosen. The box, to be known as the K2 was deployed in London in 1926. The post office suggested it be painted red.

The K6 was introduced in 1935, designed to commemorate the silver jubilee of King George V. It was a smaller version of the K2, and went on to be installed prolifically around the country. It is the most recognised and iconic telephone box, that many people around the world are familiar with. The first K6 is still to be found outside the Royal Academy of Art in London.

Other versions of the red telephone box were designed and implemented but none were ever to survive the popularity of the K6.

BT offered councils to ‘adopt-a-kiosk’ for £1 to keep local K6’s in place. Many have found alternate uses as mini libraries/book exchanges & art galleries, and even for storage of heart defibrillators.